Established in 1973, with roots dating back to the end of WWII

Established in 1973 as a result of the end of the church’s connection with the Combined Church Choirs, OLCS has based itself at the Oxted United Reformed Church (OURC). Formerly known as The Church of the Peace of God, its configuration initially proved difficult to stage concerts and so for a number of years we performed at St. John’s Hurst Green (1991-2001). However, at the turn of the millennium OURC was refurbished and the new layout made it possible for us to rehearse and perform in the same place and we have made it our home.

The connection with the end of WWII?

Well, the Combined Church Choirs started as a result of a thanksgiving service held in the Plaza Cinema, Oxted in 1946 at which the country was giving thanks for the end of the war. If we go back a little further in history and look at how the Combined Church Choirs was established it’s interesting to note that it originated from the Oxted and District Choral Society which boasted as its patron Dr. R Vaughan-Williams, O.M. and it’s lead tenor was Michael Tippett. It could be said that OLCS has illustrious origins.

We are proud to have a copy of a programme from 1942 in our archives and a copy is shown below. 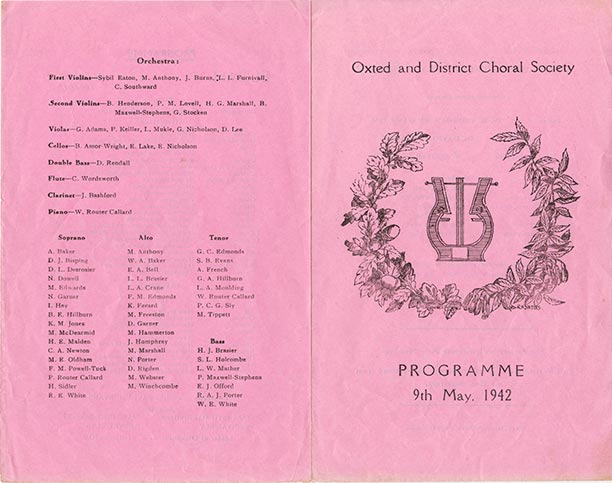 With thanks to Angela Hosp for her help in providing some of this information.

Programme Details from the ‘70’s.

May ’73 (Church of the Peace of God, Oxted. The United Reformed Church.)
Bach Mass in B minor (Roger Gaunt conductor)

Programme details from the ‘80’s. Musical Director Michael Burbidge from 1986.

Dec ’07 (OURC)
‘A Christmas Confection’. Handel: Coronation Anthems; Tavener: The Lamb; Brahms: How Lovely Are All Thy Dwellings; Handel: For Unto Us A Child Is Born; followed by a selection of choir and choir with audience carols. Nigel McClintock organ.

June ’12 (OURC)
‘Jubilate! A Summer Celebration!’ – celebrating the Queen’s Jubilee and hosting the Olympics! Handel: The King Shall Rejoice; Purcell: Come Ye Sons of Art; Parry: I was glad; Dyson: Four Songs for Sailors; Gilbert & Sullivan: “Pirates” and “Pinafore” – a medley; Glover-Kind: I do like to be beside the seaside: Coleridge-Taylor: Impromptu no. 3: Arne: Rule Britannia!; Parry: Jerusalem; Elgar: Land of Hope and Glory; The National Anthem. Gerard Brooks organ.

June ’15 (OURC)
‘A Summer Prom!’ – A feast of English song with a dash of Pomp and Circumstance! Gerard Brooks piano / organ.

Dec ‘16
Christmas Concert. Vivaldi: Gloria; followed by a selection of choir and choir with audience carols.

June ‘17
Summer Concert. A Fest of Summer Song! A medley of lighter music, from Gershwin to Fauré.

June ‘18
Summer concert. The Spirit of Britain. A pot-pourri of British Song for a Tea-time Concert